Join us in the FREE masterclass "Would You Want To Be Led By You?"

How to Stop Workplace Gossip

Workplace gossip can stop team performance in it's tracks. Use these tips to be the best leader you can and role model for others how to avoid the gossip trap

Workplace gossip is too common, and is devastating to entire companies. Within the 2% of companies who make it to high-performance status, harmful gossip is non-existent. It's not tolerated, because they are too engaged in working on things that matter. Because their focus is on driving people up, not driving each other down.

Maybe even worse, if you are a gossip or let gossip flourish in your team it will damage your career as well.

Whether you're the one gossiping or being gossiped about, it's essential that you learn how to deal with gossip, and how problematic it can be. It doesn't matter whether the gossip is true or false; it has no place at work.

The adverse effects of gossip are strained relationships, mistrust, discontentment, even anger, and decreased productivity. For example, how much time have you wasted, in long conversations, complaining to others about the assistant who isn't as helpful as he could be. Or your partner who isn't as loving as you'd like. Or how you know that that other department has a hidden agenda, that conflicts with your team's goals!

Most of us intuitively realize that people who are gossips do not have an inner world that is healthy and rich.

If someone is a workplace gossip, it is because they feel insecure/inadequate. They have a low sense of self-worth and are desperate to find some way of feeling better about themselves.

Contrast this with a person why shies away from gossip. These people are too busy focusing on being the best they can, on making their dent in the universe.

Think of someone you know who seems to stay away from workplace gossip.

Contrast that with a person who is a known workplace gossip.

Gossipmongers aren't trusted. I bet you've caught yourself wondering, as you walk away from a gossiper: "I wonder what s/he says about me when I'm not around?" 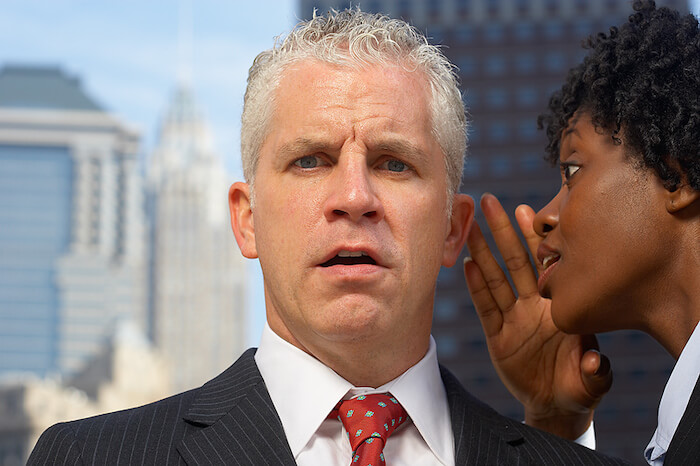 Worried about gossip in your workplace? Consider being coached by me in how to handle it.

Every relationship builds from a foundation of trust, reliability, and integrity.

As a leader, you are responsible for developing healthy relationships, both with your direct reports, your colleagues and your senior leaders. Involving yourself in workplace gossip is a surefire way to undermine your credibility as a person and as a leader.

So, as tempting as it is to talk about others ... STOP IT! It doesn't serve you or them.

Have you ever tried going seven days without talking about another person, period?

Try it, but don't be surprised if you can't get past the first hour without finding yourself talking about someone who isn't a part of the conversation!

Gossiping may make you feel good in the moment, (you got some frustration off your chest) but it doesn't make the issue go away, does it? Nor does it build powerful performance!

If your workplace is filled with gossip, you can almost guarantee that it is under-performing

Gossip is one of the most significant causes of distrust, and consequently under-performance in any business

What sets high-performance leaders apart from others, is that they:

Click here to discover more about coaching with Shelley

As a leader, it is not your role to be a sounding board for complaining and gossip in the workplace ... nor to solve people's issues for them. Instead, it is your role to coach and guide people to resolve their issues with others, quickly and successfully.

Allowing people to complain to you encourages under-performance

Here is an example of one of the skills you will learn in the "Successful Feedback" training.

Imagine Mary is complaining to you about Jim.

A high-performance Leader would ask a question such as: "Are you telling me this so I can coach you in how to work through this problem with Jim? Or, shall we find him so we can all discuss it together?"

Do this in a supportive way. Your intention is to develop the skills within your team so issues are resolved quickly. You don't want to punish, nor to let issues bubble and fester until they turn into volcanic proportions.

If the person's response is, "No I just want to vent." Then say something like, "Look, that doesn't serve you, me or Jim. I'm happy to work with you to find some solutions you could discuss with Jim. But I don't want to get caught up in venting sessions".

When you do this consistently, your people will know that they can trust you. That you won't talk about them unless they are present. It will be one of the greatest acts of leadership that you can do - also one of the most unusual!

There are two things you should be aware of when listening to workplace gossip:

What type of leader and person are you?

You will be able to find a lot of well-justified reasons for gossiping (or whatever name you want to call it). However if you are dedicated to high-performance, then ask yourself:

In the Moment Of Choice you need to decide who am I? Am I a Message or a Warning?

What to do when you find yourself involved in workplace gossip

It is the high-performance leadership way to be the person to put a stop to the gossip. Which is fairly easy when you are dealing with your direct reports. You won't find it overly challenging to say, "Hey, I don't talk about others unless they are present. And in our team I expect you to do the same."

However, it may become more problematic when you are amongst your peers or your leadership, and they are 'bagging' another person or group.

Use your best influence skills and let them know you prefer to focus on solutions. And that it would be best to have the other party involved in the conversation to get it fixed. It might be at this time that you will need to have a conversation with your Prostitute!

If, directly confronting the gossip, seems too unsafe, your other options are to change the topic, or find a reason to excuse yourself from the conversation. Don't stand there with your ears open! Even listening to it will seem like you approve of it. So, either ask for a topic change or just walk away from the situation.

As you are role-modeling being a gossip-free zone in your team, their performance will shift. People will begin to notice that there's a great vibe going on in your team. They'll get curious and want to know what's different in your team. And that's when you can share with them your 'put-down-free zone' non-negotiable.

In the "Starting Your Ideal Leadership Role With A Bang" training, you are asked to create your non-negotiables. Then share them with your team. Whilst this training is designed for someone who is starting a new role the exercises in the program may benefit you.

When you are the one gossiping

Should you find yourself talking negatively about someone else, forgive yourself your humanity. None of us are perfect. However, be mindful to own your part of the story. Maybe you could say something like:

"I know this is unhealthy and I am gossiping, I am stepping out of my integrity, but I just need to vent. Can you listen to me and then offer me an alternative viewpoint. Or help me to develop a strategy so I can raise my concerns with the other person in more constructively."

The question I ask myself when I find I'm fuming about someone is, "If I am being the best possible version of myself, what positive things would I look for in this person, and what would I do in this moment?"

Admittedly, at times that can be very, challenging, especially if someone has done something hurtful or very annoying. However, the definition of unconditional love is to "look through the eyes of your higher source and find the good". It's always there. Just sometimes the good is buried underneath the gunk that is life.

If I am being the best possible version of myself, what positive things would I look for in this person, and what would I do in this moment?

- Use this question as your mantra -

Asking a question like this doesn't mean that you give in/give up/become a marshmellow. Instead, it starts to put you in a mindset that sets a more positive tone/vibe for any conversation/interaction you might have with this person. Get your mindset right and that will lead to positive result .... rather than an escalation of the problems.

Gossip in the workplace Awareness Activity

Get more on how to use gossip positively to enhance your own and your team's reputation.