What would it be worth to you, if you had fewer employee hassles, less conflict and better performance in your team?

Make sure you download the handouts before you start to watch/read - you'll need them!

If you’ve got people headaches and you’re looking for some relatively easy to implement solutions and tools to improve employee performance, then this training is for you.

I’m going to share with you two reasons why you’ve got people under-performing and four ways you can improve employee performance.

Before we get to that, I've got a little test for you.

Grab a piece of paper and pen, (or download the handouts here and use those)

Then using the scale of 1 to 5, rate each leader against each of the questions below.

How often did this leader talk to you about: Why what you do as a team or organization is important.

How often did this leader cause you to feel that he or she cared about your success and that you were appreciated?

How often did this leader give you feedback about the impact of your behaviors on others or situations and inspired you to want to act differently in the future?

And the key there: Has inspired you to want to act differently. Sometimes you can get feedback and all it does is make you grumpy right!

How often did this leader ask you for ideas that would help the company improve its performance?

And I've given you some ideas there in terms of make or save money, improve productivity or improve morale.

Write down 2-3 words that describe how this leader made you feel on a regular basis.

On a scale of 1 to 10. What was his or her impact on your performance?

1 being Terrible and 10 being Peak Performance.

We'll come back to this a little later. But, as we go through the rest of the training, keep these two leaders in the back of your mind.

Here is the first of your tools to improve employee performance

Which of your team members are the most dangerous?

For now, let's discover who are the most dangerous people in your team.

And I suspect you're going to be in for a big surprise because the answer may not be that obvious to you.

When we think about the people in your team, each of them come to work with a particular Attitude and while they're at work, they Focus their energy in a specific way. 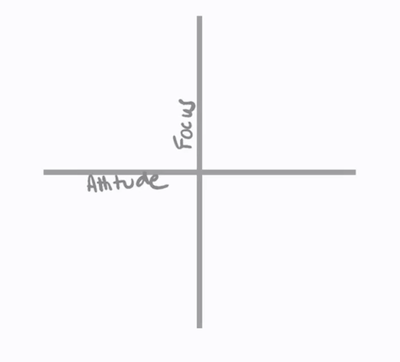 When we think about attitude, people either drag themselves into work with a "I have to" go to work attitude.

Or they arrive at work with a" I want to" go to work attitude. Two ways employees can focus their energy while at work

And when we look at focus people can either behave like a Worker:  "I come to work, do my job, I do what's asked me and I go home."

The second way people can think and behave is like a Business Partner: Somebody who focuses on making money for the company, finding ways to improve systems, reduce frustrations and drive better business outcomes. 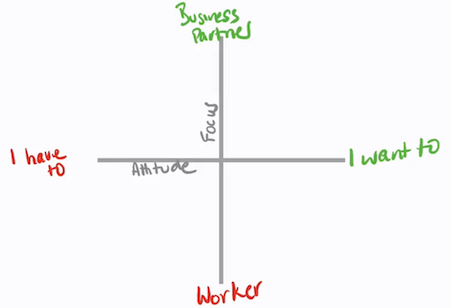 And when we think about most workplaces, you'll find you have people in all four quadrants.

The challenge for any business is how many you have in each of the quadrants.

As we delve deeper into each of the zones, I want you to think about the individuals in your team and which zone they best fit into.

Now, I'm going to make a guess that most of your people will fit into two zones and that could be problematic for you if that is true.

So we're going to start down here in what we call the Hostage quadrant.

How many Hostage employees do you have? These are the people that turn up and do the bare minimum and go home again.

If they won the lottery, you wouldn't see them for dust.

And the words we use to describe these people are desperate, resentful and miserable.

And not only are they desperate, resentful and miserable, they make everyone around them feel the same way.

I worked in a couple of companies early in my career where most of the workforce sat in this quadrant and it was pretty dismal.

Filled with conflict and sour people who just didn't trust each other.

And if you've got a lot of people working in this quadrant then, like the two companies I worked for, you're going to be in crisis or survival mode and you're likely to face the same fate those two companies did. They were taken over and 90% of the workforce or lost their jobs.

So this is a real problem zone.

Let's hope that the percentage of people in your team who sit in this quadrant is very, very low. 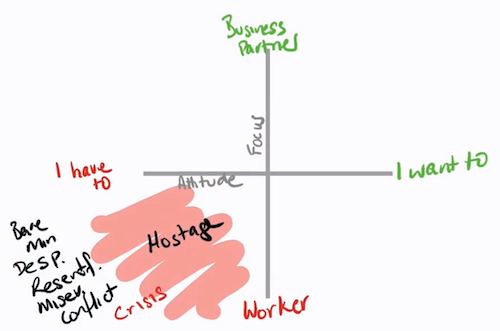 How many Charmer employees do you have?

Let's turn our attention to the next type of team member ...

who has a worker focus, but is coming to work with, "I want to" attitude.

There could be a whole bunch of reasons why someone comes to work with this type of attitude.

And so we call these guys Charmers or sometimes Eager Beavers.

Team members who are in this quadrant are very good solid workers who feel good to be around. 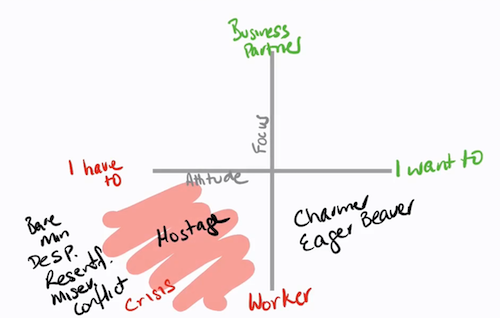 They are generally positive and really want to please.

Because they're so nice to be around, that actually makes them a little bit more dangerous than the Hostages.

The reason they're so dangerous is because they're still coming to work with a worker focus: "I come to work, do my job, do what asked of me but now I'm doing it with a smile on my face."

And because of my nice attitude, you don't see me as so much of a problem as my Hostage teammates.

And the reality is they are as ineffective as Hostages.

If you handed them a process or a procedure or a system, they'll happily keep using that process even if it's broken, they pretty much keep doing what they've always done.

In fact, like hostages, they recreate. They're unlikely to suggest any radical game changing innovation.

And here's a harsh reality about these types of team members.

If they left tomorrow, you'd be sad to see them go, but the business wouldn't overly suffer.

You'll be able to replace them fairly easily.

You see, they are still primarily recreating because they don't have the tools, the capability and focus to make quality decisions and improvements like a Business Partner does.

And because their business acumen isn't strong, their improvement suggestions can often have mixed results in terms of how efficiently the company uses its limited resources.

When you have a lot of Charmers in your team, you can pretty much expect that your business is flatlining.

So we call this an amber zone.

It's not as dangerous as the hostage zone, but it's definitely a bit of a problem zone. 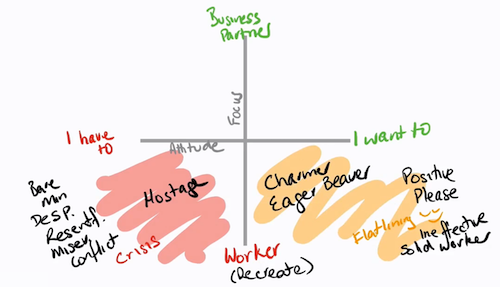 So what percentage of people in your team do you think sit in these two quadrants?

And you'll discover why having most of your people in the two amber zones could be setting you up for failure.

Then we'll start to unwrap the tools to improve employee performance. With these tools you can shift your people above the line and keep them there.