Quick and Easy Tips for Engaging Employees for the Long Term

Key Point: To get and keep people engaged, you need to help them to understand how their role, their team, their organization makes a difference

If you've got team members who are not shining to their full potential, it might be because you haven't connected them to a compelling reason for doing their work.

Everything starts with a vision. A clear picture of where you are going - both long and short-term. For example, say your senior leadership decided that the major organizational goal for the year was to increase EBIT by 15%.

So we can make money ... just doesn't cut it when it comes to inspiring people

If someone asks you "We are doing this because?", and the best you can come up with is "To make money for the company", you'll likely find a nod of dis-interest. For most people that's a kind of 'so what' vision. And the person is likely to get on with their job. Doing it competently, but without brilliance.

And, I don't know about you, but even I'd go a bit ho hum, if the money was going into some big black hole that basically kept me in a job!.

You need to get people focused on a compelling 'because'. The 'because' is the thing that is bigger than money and profits. It is the 'thing' that gives people a sense of meaning and purpose to what they are doing, so that they feel they are making a difference.

You've got to make money ... but that isn't the only reason for an organization's existence!

Don’t misunderstand - every organization, must make a profit - even not-for-profits need to be cash flow positive.

However, just as oxygen is critical to your survival as a human, you and I both know that breathing is not the sole purpose of human existence; similarly where profit is the oxygen that keeps an organization alive, neither is profit the sole reason for corporate existence.

If you go to your teams with 'we are focused on EBIT growth of $1,000,000' you will get a response ... some positive, some negative. However, if you talk about the why it is important then you will begin to engage their hearts.

You want to generate the same passion and enthusiasm for your organization, from your people as high performance organizations such as: Apple, Virgin, Google, Microsoft, Harley Davidson and Southwest do.

Why Southwest is Successful

As Southwest ex-CEO James Parker says in his book "Do The Right Thing",

All of these components of the Southwest formula were fairly easily discernible to the experts who tried to dissect the formula for Southwest's sustained success. Like all dissections, however, their studies revealed only the physical aspects of Southwest's success. Dissections never find a soul. Nor do they find things like spirit, dedication or love.

"Most of our competitors missed a few other secrets to the success of Southwest Airlines because they focused only on things they could understand. Well they weren't really secrets; we talked openly about them, but apparently most of our competitors didn't believe us. So I don't mind sharing them with you now. I assure the majority of leaders of the business world won't believe me anyway.

... The key was our people. They were dedicated. They were spirited. They worked hard. They understood the mission of our company and believed in it. They made flying fun for our customers, and they had fun themselves. This was their company, and they were determined that it would succeed.

... These were the things our competitors missed in their dissection of Southwest's business model. They were not the physical thins; they were the spiritual things - the soul of Southwest Airlines, so to speak"

The higher purpose that galvanizes Southwest employees so much, is captured in both their stock market ticker symbol LUV (which became the airline's unofficial logo - they became known as the 'love airline') and their company slogan "giving Americans the freedom to fly". Again from James Parker:

"To customers, the slogan conveyed our basic business strategy - low fares, frequent flights, and great customer service. Internally, the message was just as powerful: We're not just flying airplanes; we're providing an important societal benefit. We're making travel affordable for people who couldn't afford to fly before. We're allowing grandmothers to attend graduations and families to take vacations. We're allowing business people to conduct the commercial affairs of the nation. We are contributing to the freedom of Americans. We've democratized the skies. We're giving America the freedom to fly."

It is no secret, that this highly successful organization is getting it right when it comes to engaging people.

They have the best results in the airline industry for the world, AND it is no coincidence that they have people working there who are committed, if not fanatical, about their company.

Get fanatical team members, you get fanatical customers ... which delivers remarkable results!

Here's What We Did to Engage Our Team Members

Not everyone is in a job, or working for an organization, that is something sexy like the airline industry. And this can make engaging the workforce that much more challenging! For example, when I worked for Colgate-Palmolive, it was hard to really talk a lot about the higher purpose of manufacturing detergent powder, for people to wash their clothes.

But, we did talk about creating a workplace where people could shine. We did talk about the difference our product made to our end-users ... people who had limited time and wanted to get their washing done quickly and efficiently without any problems.

You Will Shine When Your Team is Connected to a 'Because'

If your organization has not done a good job of clearly defining and expressing their 'because', then don't let that hold you back. Set up a time for your team to discuss the impact they have on the business, on the community, on each other.

When you engage your people's hearts in something bigger than just doing the job it will set you apart from others in your organization. 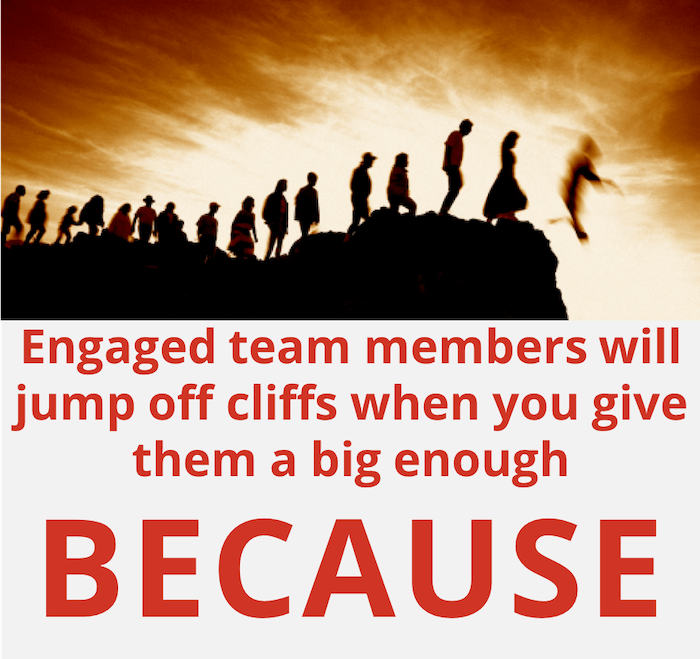 Be creative and look for the difference your work makes either in the broader community, within your organization or for the individuals in your team.

Once you've got your 'because' clear then turn your attention to the individuals in your team. Help each of them to see how they specifically influence the success or otherwise of the team and the larger organization. Teach them ﻿﻿the mindset of a high-performance employee so that they take complete ownership for their personal 'because'.

My experience has certainly been that once people get their heads around this, they more eagerly and willingly focus on profit goals.

Your ability to help individuals relate their work to the organization's higher purpose helps you to engage your team members and this leads to high performance workplace. So few people are good at it ... that you must shine when you do this.

Here is an article on how I would connect a Pizza delivery driver to his company's inspiring reason for being.