Reading the Self Efficacy article first will help this page make sense.

Because of John's low self-esteem and belief in himself, it was holding him back from the success he desired.

Here is how I, (his leader), was able to help him gain confidence and belief in himself, using the four steps explained on the Self-efficacy page:-

In a chat about his hopes for the future, John mentioned, "I'd love to take on the co-ordinator's role for the team, someday. But, I'm terrified of getting up in front of a large group and talking" (Physiological State of Anxiety and Nervousness).

I could see this was a perfect chance to help him improve his self-efficacy. So I replied, "If you would let me, I'd love to work with you on this . I really believe you can do it . Do you remember last week when you spoke at the project group meeting,  you did so with such conviction. I know you could replicate this with the bigger team" (Positive feedback). 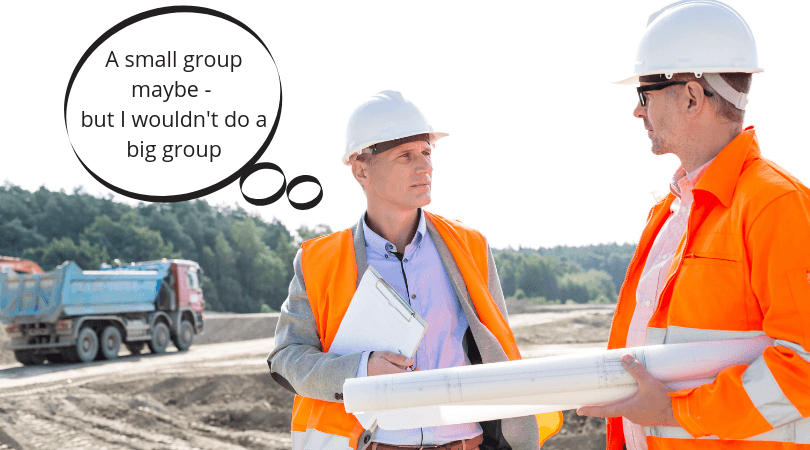 I mentioned that I'd been working with another of his peers, who had had similar concerns (Peer Modeling). We agreed that with some focus, and learning of new skills, he too would eventually be able to get up in front of a group. Stand up with a degree of confidence and hopefully with his nerves well managed!

One of our first areas of focus was to get John to start to be more vocal in the smaller group. Taking the lead in discussions, where he may normally have sat back, and stayed quiet. Volunteering to present information, where normally he would have sat back and hoped someone else would do it.

After his first presentation at the smaller group, we went over what went well, and what he could improve (Feedback).

He found, that with a little more preparation beforehand he was able to confidently and articulately participate in the small group discussions (Successful Experience).

Some weeks later, he volunteered to lead up a new project team, knowing that as leader of this team, at some point he would have to report back to the larger group. Sure he was a little nervous. But, the success he had had, in the smaller group, held him in good stead. As time went by with this project, his confidence grew at taking the lead role. Eventually, he made his presentation to the larger team.

As we debriefed his presentation to the larger group, he said, "You know, that went well. I never thought I'd be able to talk in front of the group like that. But I did. I'm starting to feel more confident about applying for the co-ordinator's role next time it comes up."  (Successful Experience)

You need to have built a strong relationship with someone for them to open up about their fears. Most people aren't comfortable showing vulnerability about what is holding them back. But when you are a leader people can trust and you understand these principles of human psychology you can transform lives.