Key Point: This process is a key enabler of improved performance

This Organizational Goal Alignment process assists in aligning team goals. Ensuring each person in the organization has a specific contribution to make to the business' success.

This process works best, if it starts at the most senior level of the organization and filters its way throughout the entire organization.

However, if you are not in a position to get your senior leadership to use a process such as this, simply use the process within your team from the KPIs that you have been given for your team.

This will still ensure that your team members are all working together and aligned toward common goals.

Step 1. Set the Priority for the Year

The senior leadership team meet for a "Direction Setting" session, to decide the organization's priority for the coming year (or quarter).

Depending upon the size of your organization, this senior leadership team is generally the CEO and his or her direct reports.

Their objective is to decide the one single focus, which if every person in the organization was working toward, would enable the organization to be massively successful this particular year.

Examples of organization priority that might come from the "Direction Setting" session are:

As you can see these are very broad. They are simply meant to communicate the theme for the year. The nuts and bolts measures come further down the process.

It will be easier for you to understand this process if we use an example.

So let's assume, for this example, that the company is a consulting firm. Let's say that following their senior leadership's "Direction Setting" session, it was decided that the organization's priority (their theme) for the year is to "Increase EBIT by $1,000,000.

This is where you decide the big 'buckets', that the entire organization must focus on.

Normally, these big buckets are also decided by the senior leadership team (and generally, in the Direction Setting session) because of the cross-functional perspective that this group of leaders has.

The idea being, that these are the five areas, they believe will give the best ROI, if the entire organization is focused upon them.

Best practice is to keep these focus areas to 5 or less. Any more than this and you run the risk of a scattered focus which can undermine your effectiveness.

Now, with the organizational focus buckets in place, it is time for each Division Head to hold a "Goal Alignment" meeting with his or her leadership team.

Depending upon your organization size, this is often the people that report directly to the Division Head. E.g. if the Division Head is the Manufacturing Director, the attendees at this meeting would be the various Focus Factory Managers.

Or if the division head is the H.R Director, it might be the Head of Training, Head of Recruitment, Head of Compensation.

The intent of this meeting is that these middle tier managers decide how, as a division, they will support the organizational priority and focus areas.

Under each of the 5 organizational focus areas, the Division Head and his or her team identify one or two areas which, if they can improve their performance, will have a significant positive impact on delivering to the priority of $1,000,000 EBIT. 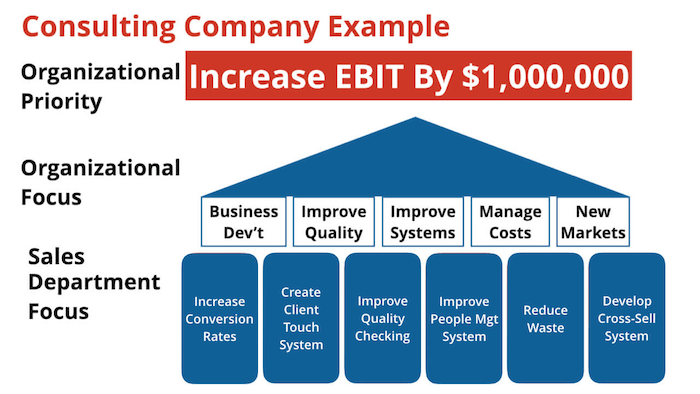 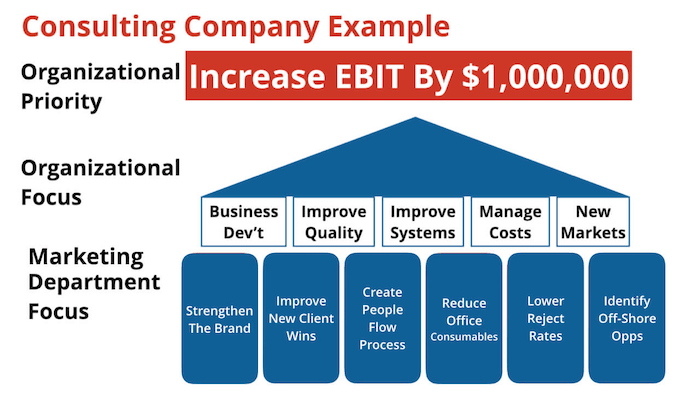 Once the Department focus has been decided, then it is time to decide the various initiatives that the Department will need to undertake in order to support the organizational priority of $1,000,000 EBIT.

This part of the process is best done with the every single person in the department present at the meeting. The underlying principle here is that people will be much more committed to successfully achieving the initiatives, when they are involved in the creation of them. The ownership of the initiatives, by the front-line team members, is instrumental to the success of this process.

Depending upon group size (and I have successfully facilitated this process with a group of 120 people) divide everyone into teams and allocate each team one Department Focus Bucket to work upon.

It seems to deliver the best results, if the teams are a mixture of people from different teams, rather than intact teams. You could choose the teams either randomly or by deliberate choice - it will depend upon the maturity and growth of your team members as to which way you do this.

Assign one of the Department Focus buckets to each team and ask them to brainstorm all the initiatives they believe the Department should work on in order to achieve the priority of $1,000,000 EBIT.

Each team then presents their results, by posting a flip-sheet paper on the wall, which is hopefully filled with a list of 20-30 possible initiatives for that specific bucket. The team should present what the initiative is and why/how they believe it will make a positive impact on the Organizational priority.

In total you probably don't want much more than 10-30 initiatives for the entire Department. So through a voting process you will want to whittle down all the initiatives brainstormed to a number that is manageable and will deliver the results you need.

The process for voting upon the final list of initiatives should be clearly decided and communicated before the brainstorming process begins. There are many ways you can choose the final list. Below, is an example of the process I've successfully used with teams.

Process For Voting for an Initiative.

If you want an open and transparent process simply post each of the brainstormed sheets on a wall. Give each person the quantity of stickers that represent their total possible number of votes. They place these stickers against those initiatives they would like to see chosen.

So a person could decide to allocate all their stickers to one initiative only, or could spread them across many initiatives.

The danger in this process is that because it is open, group think might begin to happen.

As people see stickers start to pile up against a particular initiative, they might begin to doubt their own judgment. And, people who might have actually allocated their sticker to an initiative that seems 'unpopular' will put their sticker alongside what everyone else is voting for.

This happens most frequently when a team is in the lower Stages of Team Development. If your team is well along the self-managing continuum, then this doesn't seem to be a problem.

If you feel that group think could be a problem, then simply get each person to write on a slip of paper the initiatives they are voting for and the number of points they are allocating to them. Then someone goes through and tallies up the votes and posts the results.

Be wary, if you are the leader, of coming in after the group has voted and saying something like, "Look, I think you got this wrong. You need to have 'abc' in the list".

If there is an initiative that you believe is non-negotiable - that it MUST be in the Organizational Alignment Chart - then announce this upfront, so everyone knows and can then get on with voting for the rest of the initiative.

You will create a great deal of cynicism and anger if you come in after the fact and announce those initiatives you wanted in there.

That anger/cynicism will occur regardless of whether 'your' initiative was included in the voting system or not. 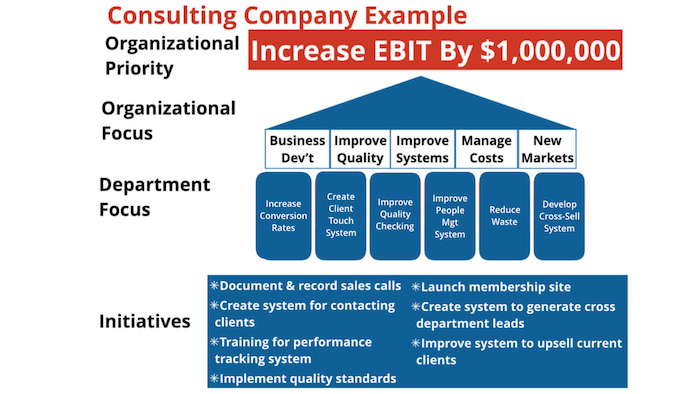 Once the initiatives are decided it is time to assign individuals or groups who are going to work on each of these initiatives.

Often at the workshop as you decide the initiatives - it will be blindingly obvious who the person is who should have the overall responsibility ("R") for delivering the initiative. Sometimes you may allocate the "R" and the support people/groups a few days after the workshop.

In either instance only ONE person must have the overall "R", even though they may need a group of people to help them deliver the initiative. If you have more than one person with the "R" you may get a case of finger-pointing if something goes wrong.

Each person in the Department should have at least one initiative (if not more), that they are involved in helping to deliver, regardless of whether they have the "R", or are just a support person providing needed input or resources to help the initiative be achieved.

Each person should decide with their leader which initiative/(s) they want to be involved with and set goals that they will deliver to.

It is best if people are able to choose which initiative they would like to be a part of delivering. When people feel control over their choices and are passionate about a particular subject, their input and commitment to success will be much higher.

If you have a person within the department who doesn't have some sort of goal to achieve that supports an initiative you must question why this person is working in your department. For example, in one organization that was focused on improving margin, their tea lady participated on a project to help reduce consumption of consumables throughout the office!

You may want to have some type of checking-in process here. Someone should be assigned responsibility for overviewing the entire process of assigning individuals to project groups and their subsequent goals to ensure there is no over/under lap.

The individual goals that you create through this process could be used as part of a bonus scheme or performance management system. If there are people in the Department whose goals cannot easily fit somewhere into one of the initiatives or Departmental Focus areas, then maybe they are working on the wrong things.

Of course, there can be exceptions to this (for example someone might be focused on a project that is two years in the future). Generally though, the goals for everyone in the business will fit somewhere within the Goal Alignment Chart.

Create the KPI's that you will use to measure the change in performance of the Department. These should be measured on a regular basis ... daily, weekly, monthly basis to monitor progress and fine tune as needed. You must have ways of measuring progress on every KPI on a regular basis. Otherwise you run the risk of ending up with a 'whoops' at the end of the year. 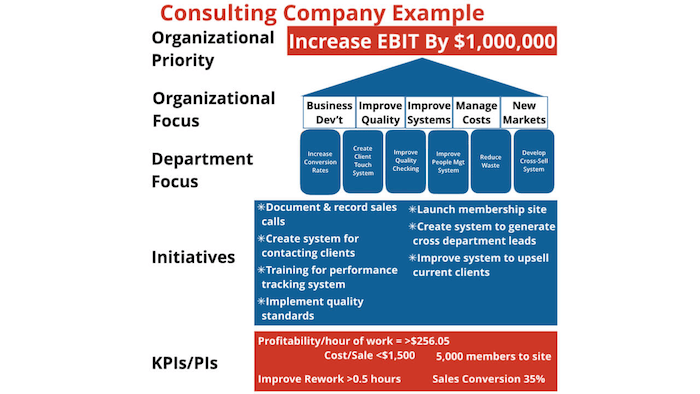 Engage Their Hearts, as Well as Their Hands

Following this process will certainly get people's heads and hands working toward achieving the goals that the organization has set. And you will get some good results.

The secret to outstanding and amazing results though is to engage people's hearts. So that they feel they are on a mission that they must be successful at.

If you want to download this article as a pdf, please login. If you aren't a member, then click on the image below to join up and access the pdf.