It is just a way of thinking

Optimism vs Pessimism - it's not a fair fight! Research shows that people with an optimistic life-view tend to outperform pessimists in all respects.

Even if you are more an optimist, than a pessimist, keep reading - as this article will help you (and helps you to assist others) use ever more of your potential, by helping you to understand:

What research has to say about optimism vs pessimism

Over the last 30-40 years, psychologists have studied the impact of our thoughts, expectations, and beliefs on our behavior. They have found, that the way you reason with yourself about the things that happen to you, has a significant impact on your success - at work, home, school, in your community, etc.

Pessimists are up to eight times more likely to become depressed when unfortunate events occur. They:

Ouch! Seems like a bunch of good reasons to get a bit of Pollyanna happening in your life!

Martin Seligman, (Fox Leadership Professor of Psychology in the Department of Psychology at the University of Pennsylvania), is known as the father of the positive psychology movement. Much of his research focuses on optimism vs pessimism.

The groundbreaking research that he, and his team, have done in this arena, is very much shaping our world. What's more, it is having a significant impact on many high-performance organizations. In this quick 2 minute video, he shares his thoughts on optimism vs pessimism.

Optimism vs pessimism - it's learned. Which means you can change it!

The terms frequently used to describe this phenomenon are, Learned Helplessness and Learned Optimism. The great news is, that because this behavior is Learned, it can be Unlearned.

Dr. Martin Seligman wrote an excellent book, "Learned Optimism: How to Change Your Mind and Your Life." In it he shows that people can dramatically impact their sense of well being and optimism, career options and confidence levels, by changing the way they think. He shares many tips on how you can train yourself to develop a more optimistic vs pessimistic outlook. Excitingly, with a bit of focus, you'll find them reasonably painless to practice.

Several years ago, I worked with two Team Leaders from different shifts. You are unlikely to come across two more different ways of thinking! Talk about optimism vs pessimism - these guys were complete opposites.

There was a drive within the facility to improve productivity by around 30%. Together with decreasing scrap rates by about 12%.

The pessimist's response: "This is impossible. Can't be done! Why should we even try to achieve such ridiculous targets?"

The optimistic Team Leader's response: "Hmm, going to be tough to get. But let's see what we can do."

Talk about a classic optimism vs pessimism response!

Within about six months, the optimist's team had taken significant strides toward achieving both goals. Even more outstanding, they were talking about how they were going to celebrate when they did reach the targets.

The pessimist's team had made some improvements, but only minimal, morale had slipped even further, and they were accusing the optimist's team of all sorts of underhand behavior. The pessimist Team Leader was very defensive about why his team hadn't achieved similar results.

I was asked to work closely with the pessimistic Team Leader to see if I could help him achieve the targets.

Because of his world-view: "Things don't go well/it's all too hard and so on," I decided the only area we should focus on was to help him to shift to a more optimistic viewpoint. Because, technically, he knew all he needed, to help his team to make the improvements the business wanted. He was every bit as competent, if not more so, technically than his optimistic peer.

Each day, I would challenge him to look for the things that were going right. Then to acknowledge and celebrate himself and his team for these small 'rights.'

I asked him to be aware of how he was responding to new ideas/challenges. To start to look for reasons why something might work, rather than why it wouldn't work, and why they shouldn't bother trying.

The change was slow.

But, as he turned his attention to looking for opportunities vs obstacles, his behavior changed. As his focus and way of responding to challenges changed so too did his, (and his team's), results.

Having a pessimistic outlook can at times be helpful

There are times when having a pessimistic view is beneficial. For example, if you are driving in thick fog, it might be useful to be focused on the fact that a car could be coming in the opposite direction!

Many studies have found that pessimists are more accurate in their assessments than optimists.

For example, in one test, researchers had people pressing a switch to turn a light on and off.

Whereas, pessimists accurately predicted how much, or little control, they did indeed have over the light.

With that in mind, it can be beneficial to have some pessimists attached to your team!

They often have a much stronger handle on reality than the optimists.

Unfortunately, these two groups are likely to drive each other nuts!

So you, the team leader, need to help the two groups value the perspective each brings. You need to make sure the balance is right, between hopeless and done deal!

When something bad happens pessimists automatically think that the cause is:

Optimists, in contrast, have a strength, that allows them to interpret their setbacks as easy to overcome. They are sure it will: 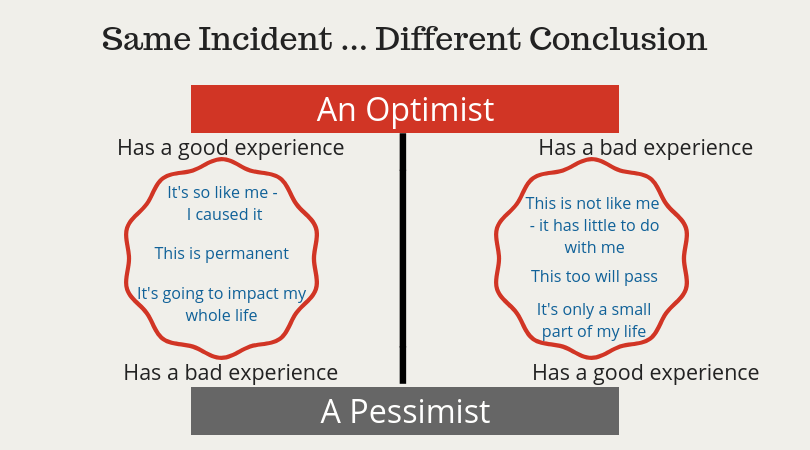 Let's take a closer look at Permanence and Pervasiveness. Because, in workshops I've run with leaders, these are the two aspects that generate the most discussion, and questions.

Let's take a look at how thinking is different for the two types when bad 'stuff' happens.

It is pretty normal that when we are unsuccessful at something, we become, at least momentarily, down in the dumps. We may even come to a screeching stop.

However, optimistic people will pick themselves up and bounce back very quickly. In other words, they are relatively resilient.

Whereas more pessimistic people can remain stuck, or bearing a grudge, (even after only small setbacks). Their negative thought pattern could last for days or months.

More unfortunately, if something significant happens to them, they may never bounce back and lapse into long-lasting helplessness.

So, when something crummy happens the pessimist thinks: 'Its forever!'

Whereas the optimist thinks" 'This too will pass'.

How do you react when bad things happen?

You guessed it. When good things happen the optimists ride that bandwagon to the limit. To boot, the optimist thinks this is how it's meant to be. This is going to keep on going!

Even more empowering they also believe that their traits and capabilities influenced the positive event.

And the pessimist? Yep, you guessed it! The pessimist goes straight to, 'This ain't gonna last.'  He or she knows this is too good to be true, and it had little to do with their skills. The event is probably more to do with some special circumstance or luck.

Our thinking is something like this for good events:

People who believe good events have permanent causes will try harder the next time. People who see temporary reasons for good events may give up even when they succeed ... believing it was a fluke.

So, now we've covered permanence, now let's move to pervasiveness. People pretty much fall into two boxes when it comes to setbacks or successes. Those who globalize events and those who isolate events.

When something bad happens, some people let that one problem bleed all over the rest of their life. For example, a person loses their job, and it affects their marriage, their relationships, their health, etc.

Whereas others, can put their troubles into a box, and go about their lives even when one significant aspect (their job, for example) is crumbling.

It comes down to this: people who make global explanations for their problems, give up on everything when a crash happens in one area. People who make specific explanations may become helpless in that one area of their life, but get on with the rest.

The thinking is something like this for bad events.

And you guessed it again! When good things happen, it all gets reversed! The optimist believes good events will enhance everything s/he does, while the pessimist believes specific factors cause good events.

The thinking is something like this for good events.

Optimists, who make permanent and pervasive explanations for good events, as well as temporary and specific reasons for bad events, bounce back from troubles briskly, and get on a roll easily, when they succeed once.

Pessimists, who make permanent and pervasive explanations for setbacks, tend to collapse under pressure - both for a long time and across situations - and rarely get on a roll.

So how do we improve optimism and hope? We do this by disputing pessimistic thoughts.

A method, developed by Dr. Albert Ellis, called the ABCDE model. (how simple is that!) Is a terrifically easy-to-use model, I've used it with teams when they have hit a setback which looks like it might derail them.