Want to Control Your Destiny?

Work on Your Locus of Control!

If you haven't already done so, you might like to take the Locus of Control quiz before you read this article.

Locus of Control refers to how much you believe you can control life events. Your 'locus' (Latin for 'place' or location') can either be:

a) External Forces (meaning you believe fate, other people, luck, etc. control your life success ) or

b) Internal Forces (meaning you believe the choices you make, and your efforts, control your life success) 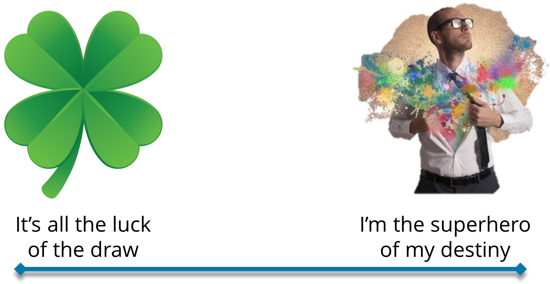 Could coaching help you take more control of your life?

People who have an external locus of control often feel victimized, coerced, and unhappy. Almost like life is constantly holding a gun to their head. They don't see much of a link between their actions and behaviors and the results they get.

They are often easily persuaded by the opinion of others, mainly people they feel are 'superior' to them. Generally, there is a lot of blame going on in their world and blaming others/circumstances for making their world an unpleasant place.

Any success, (or failure), they experience they are likely to put down to luck rather than their efforts. They have a belief that their world is being played out according to someone else's game plan (be it a person or circumstance).

Whereas, people with an internal locus Of control feel much more flow in their life. They believe they have strong command over their destiny. They see a real link between their actions and the likelihood of getting positive results in their life.

People with a high locus of control generally take responsibility for their actions. Are more inclined to hold their own opinion than being swayed by others. Are more likely to meet challenges, and succeed in achieving their goals. They learn from past experiences and apply their knowledge to future problems.

The good news is that your locus of control is generally considered to be a learned trait, rather than an inbuilt personality characteristic. Which means, if the results you are getting now, aren't delivering you the life you want ... then you can change that!

Ways You Can Increase Your Internal Locus of Control

Live Above The Line

Make sure that, in any situation, you take responsibility and accountability for the choices you make. Every time you choose (or choose not to choose, which is still a choice!) you want to ensure that you are acting above the line.

If you find yourself in a situation, where you don't believe you have any control, set yourself a small goal, which will give you a win. This will build your sense of having some control. Then set another goal and another. Instead of feeling helpless, you quickly realize there is much over which you have control.

Stay on Your Personal Growth Journey

Reading, listening to audios, attending seminars, webinars and workshops are all terrific ways to continue to grow your belief in yourself, and your capability to handle all that life sends you.