Shift your leadership style appropriate to the individual's level of development

Have you read the Saboteur article? It might help you make sense of this page.

Let me give you an example, from many years ago, from my life and before I had this knowledge of archetypes.

I was working for company and we were setting up a ‘green-field’ manufacturing facility. We had the vision of establishing this as a high-performance workplace, and I was one of the key leaders chosen to help bring this vision into reality.

Because it was a new factory, and we were committed to high performance, we had designed a very intensive selection process.

In order to get a job with us, each person who was applying for a role as Production Team Member, went through about 11 hours of selection activities (over a period of about 4 months), including aptitude tests, role plays, group discussions and interviews.

As the People and Culture Leader, and responsible for the selection process, I was very much the voice for the company. Telling people over and over, in every interaction they had with us, how this was going to be a very different place to work, how they were going to be empowered, listened to, and participate in decision-making within the business.

And this, at a time, when employee empowerment was really quite unusual.

Eventually after 18 months of planning and organization design activities, we we finally flung open the doors and our first Production Team Members started working with us.

Now, if you’ve ever been involved in the start-up of a business you know that the hours are long and with Murphy’s Law if anything can go wrong it will. 18-19 hour days can be the norm and people are exhausted.

But, as part of our commitment to creating a high performance workplace, we had fortnightly meetings where every single person in the factory came together to discuss the state of the nation. To talk about successes and problems from the previous couple of weeks, to talk about what was coming up and to air concerns.

After we’d been operating for about 4 months, with all the normal start-up frustrations and hiccups, several of the things that I had promised, during the recruitment process, had yet to be implemented.

One particular day, I happened to be leading up a section of the fortnightly meeting, when people’s frustration bubbled over. They were complaining and venting their frustration. I was at the front of the group taking the brunt of, “You said this, you said that, why hasn’t this happened…" And on and on it went.

After several minutes of standing there, and absorbing their frustration and at times anger, I stated to feel attacked and to feel defensive – I was feeling very alone and very vulnerable. I can clearly remembering feeling, that they were inferring that my integrity sucked and, even though the words weren’t being said, that I had ‘sold them a line’ — which couldn’t be further from the truth. (It was just that many things, hadn’t gone the way we had hoped in the hurly burly of start up. But, we the leadership team were still strongly committed to our vision of a high performance workplace. But our team members weren’t convinced of this!)

I was looking to the rest of my leadership team, sitting in the meeting, and on the inside begging, pleading with them ‘help me out here guys’. Yet not one of them, jumped up to help respond to the team member frustrations.

No-one was making a move to help me out, so I was starting to feel resentful.

So here I was feeling attacked, vulnerable and resentful.

As you know, when people are feeling under threat, they do one of two things they fight or the flee. My option of choice, at that time of my life was always fight – it was instinctive and out of control. If only I had known about the Moment of Choice back then, the rest of this scenario may have played out a whole lot differently!) 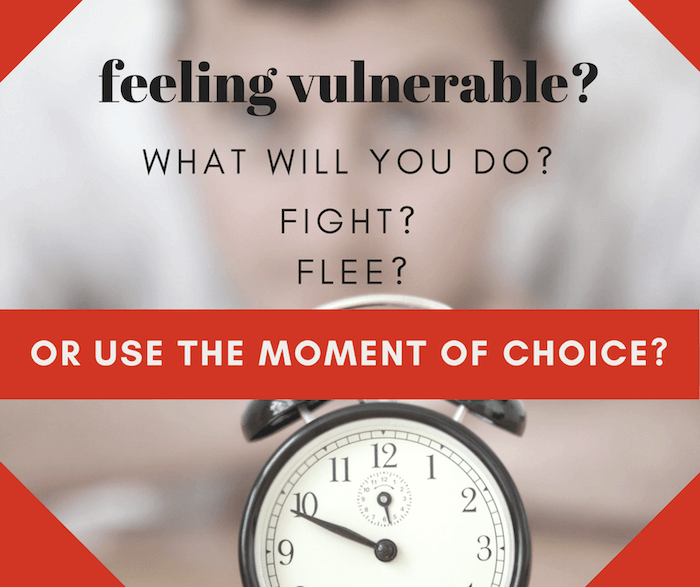 So, when nobody seemed to want to listen to my explanations, and none of my colleagues from the leadership team seemed to want to step in and support me, I had a rush of blood to the head, became furious and launched into full attack: and what came out of my mouth next is something that every great leader can learn from – so get your pens and pencils ready folks I said …

Remembering, these people had been through a 5 month selection process, and they’d been told about the wonderful empowering culture they were coming to work in, and they were so excited to be a part of the creation of something new and different …

“Well if you don’t like it, there’s the front gate you can all leave.” It was certainly not, one of my life’s crowning moments! It was just awful, I was mortified at what I had said.

The next thing I did, was something every exceptional leader does –

I burst in to tears and turned on my heel and left the room! Oh dear!

Of course, it created some chaos for a few days – how could their People & Culture Leader act this way – this person they had trusted and who had said this workplace was going to be different from anything they’d ever worked in.

Now, even though I was able to repair the damage, apologize for my behavior etc and the majority of my workmates got over it (some fairly quickly, but with a few it took many, many months) – more than two years later my inner judge was still punishing me for that moment.

In the hours that immediately followed the event, I went over and over it in my mind. Thinking thoughts such as “You’re such a fake and a fraud. You are no leader. Who were you to think that you could inspire, guide and lead people. Look at what you do the moment you are under pressure“. By replaying that moment over and over, with these strong emotions attached to it, I deeply ingrained this in my subconscious.

I allowed my Judge to run unchecked and unexamined and my inner world became filled with non-supportive thoughts … emotions that were causing behaviors and problems that were hidden from my conscious thinking.

About 3 weeks after that ‘fateful meeting’, I needed to get up in front of a group to present and to my absolute amazement I froze.

My voice shook, my knees wobbled, I had butterflies. Me, who in the past, had easily gotten up and presented in front of hundreds of people… in fact thrived on it.

And for the next few years, whenever I needed to get up in front of a group, I got a sick empty feeling and a wavery nervous voice – I’d be up there choking. And I couldn’t figure out why.

I hadn’t made the connection between,

But, with all those negative thoughts, bubbling away in my subconscious, there was no truth in my voice and I didn’t feel worthy of trying to inspire people.

Thankfully, through my journey of self-discovery I learned about the Judge and Saboteur was able to make the connection and re-program myself with something far healthier.

Certainly, if I hadn’t you would not be learning this information from me today. I would not have gone on and influenced many thousands of people in a positive way since.

Why This Was Also My Saboteur in Action

This particular job was bigger than any job I had ever had. I was working within a team of very engaged, dynamic and successful leaders.

Whilst on the outside it appeared that I was confident and sure of myself, on the inside I was cowering with fear that I wasn’t good enough. And, most significantly, if you had asked me at the time, I wouldn’t have been able to tell you that this role terrified me and that I would make a right royal hash of it.

I simply didn’t have that awareness or insight, because I didn’t spend any time on self-reflection.

As we learned in the Saboteur Article, when you're not feeling worthy of something, your Saboteur will kick in to get rid of the pressure for you, which in this scenario, happened magnificently!

I do so hope, that if you have a strong inner Judge doing a real number on you, or your Saboteur is impacting your life – at work, at home, in your relationships – that you begin a journey of self-discovery to release your truth so that you can get on and fulfill your destiny.