Use a responsibility chart to stop confusion and conflict

I bet  you've been involved in a discussion that went along the lines of:

"I thought you were doing that?" or "I didn't realise that I was meant to do that"

Confusion reigns in many organizations because they haven't taken the time to use a tool known as the Responsibility ('R') Chart. Or they have created an R Chart but haven't updated it for years. This simple, but powerful little tool is one all high-performance leaders make use of.

What is a Responsibility Chart?

Simply put a Responsibility Chart enables you to engage your team members in discussions about responsibility for tasks/activities and decisions that the team must make. In other words you are deciding who does what, who needs to help who needs to know about it, and who has approval/veto power.

Why developing an R Chart is useful

It becomes quite apparent through this process where your inefficiencies or confusion reside. This can help to minimize conflict and maximize productivity. 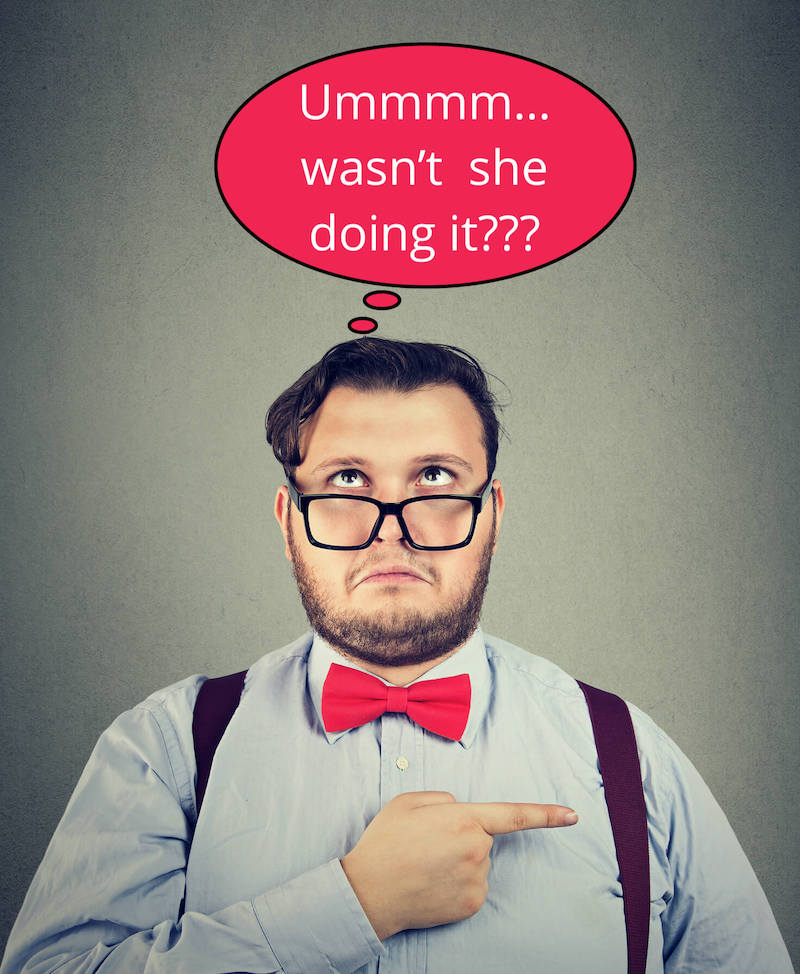 For example, it might be, that team members believe when a person resigns from their team, they are responsible for recruiting a replacement, and that the HR function only need to be informed. Whereas, the HR function might believe, they should approve each and every recruitment activity, regardless of whether it is a replacement or newly created role.

Or, maybe the team believes the Quality Control Manager is responsible for approving all goods put on hold, whereas the QC Manager believes s/he should only be informed, after the goods have been put on hold.

It takes time and can be messy ... but it is worth it

The R-Chart process can prompt some fascinating discussions that could lead to conflict initially. Discussions can be very robust, and sometimes time-consuming.

Thankfully, if you keep working through the process, it eventually leads to clarity and allows for the development of the appropriate processes and systems for the team to function effectively and efficiently.

Certainly it is a process that takes time, but it is time that well spent. But, at the end of the process you have a richness of understanding and clarity in the team that can transform performance rapidly.

I have witnessed a team that, within a three month period, went from confusion and inefficiency to improving their productivity by a factor of three and team morale soared.

The Responsibility Chart can be used:

Process for creating your R-chart

Let's take a look at each step in more detail ...

Decide who to involve

You need to decide if you are going to create the R-Chart:

As you can guess there are advantages and disadvantages to each approach. A lot will depend upon the outcome you want to achieve as to which method you choose.

For example, if you had listed the following, as your desired outcomes for putting together a Responsibility Chart:

then your only option, to be truly successful, would be to complete the R-Chart process as an entire team. Using a scale of 'high', 'medium' and 'low' the table below provides an indication of what you can expect: 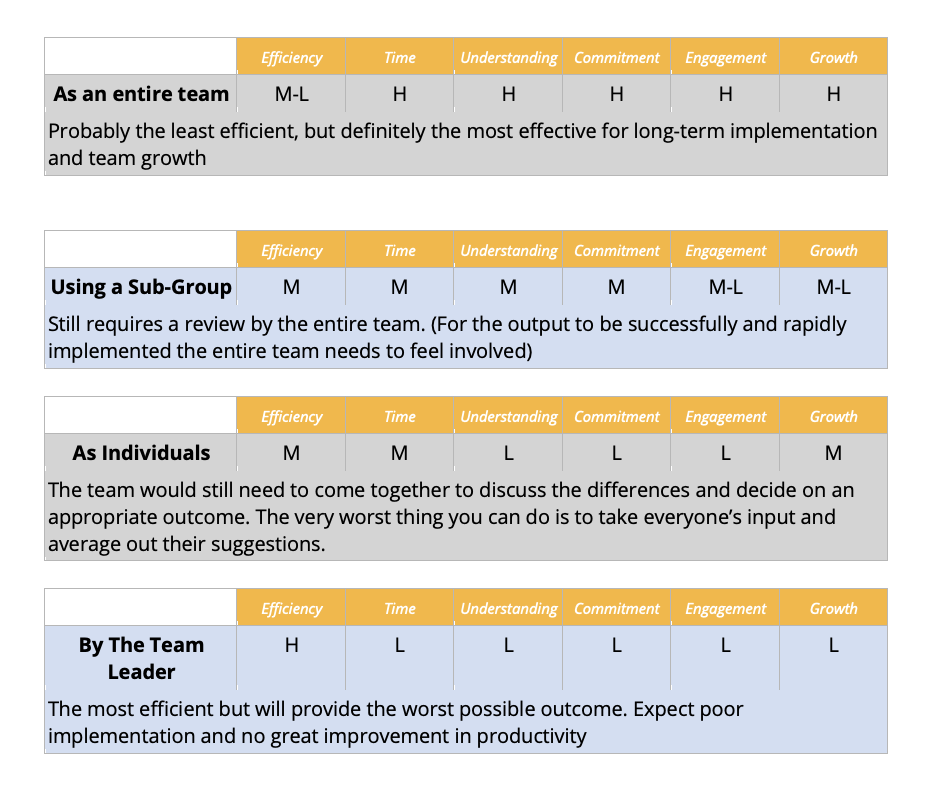 As the R-Chart is developed, particularly when the team is engaged in creating it, there are often many powerful and enlightening discussions. You can literally see light bulbs go off around the room as people gain a fuller understanding of what has to happen, in order for the end product or service to be produced.

You witness people start to question why a specific task or decision, needs to occur as it does, and whether that is the most efficient way for the team to operate.

Once you've decided how you are going to create your Responsibility Chart the next step is to:

The real value is in the discussions

The reality is, that the output of your Responsibility Chart is not necessarily the most valuable thing that happens in this process.

More often than not, it is the quality of the discussions that you are having, that often sees radical improvement and transformations in productivity.

Draw up the R-chart

The R Chart can be done across an entire organization, for a team or for one single process.

It's best to set the matrix up in a spreadsheet, for ease of editing later.

Across the top row list each role in the team. Down the left-hand column list the activities/decisions that you are analysing. It is best to start with large chunks and then break down into smaller activities. For example:

You may want to break each of the sub-headings down even further. Say you were looking at the Selection process. You might break that down into: 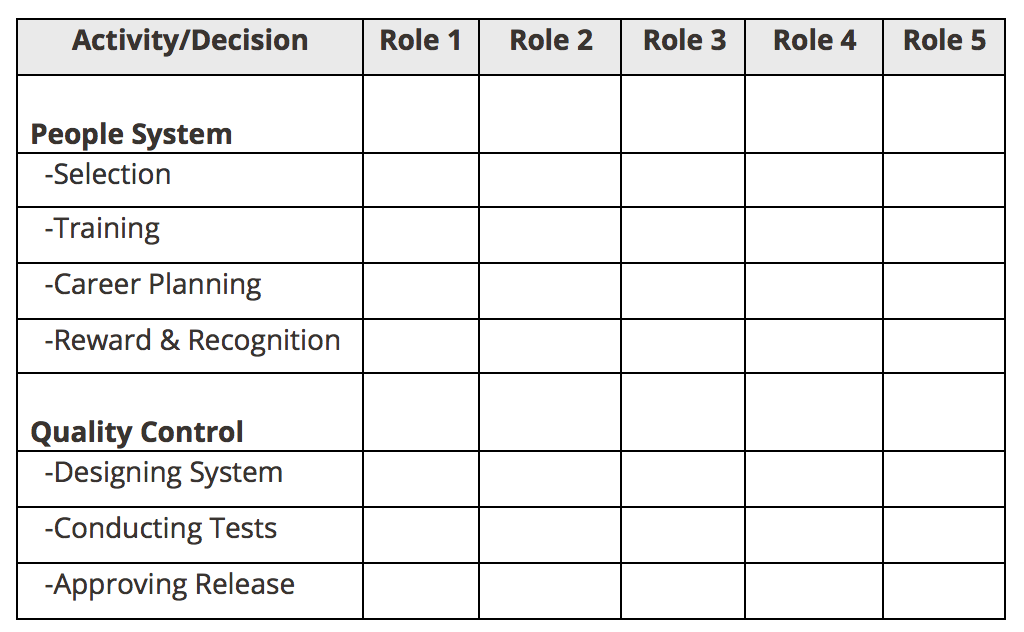 Go to the resources section to download a sample organizational template. Many of the elements within this template should short-circuit your development process and stimulate your thinking.

Now comes the interesting part. Here you begin to indicate who currently has the "R", "I", "S" and/or "V".

Keep these guidelines in mind as you decide any changes to be made:

The following documents are available for you to download:

Pay What You Want to Access these documents. Minimum is set at $1 - so if that is all you can afford, then that is all you need to pay. But, if you feel these documents will make your life easier, then please feel free to pay an amount that you feel it is worth to you and acknowledges the work I have put in to create them for you. Or consider becoming a member where you can access these and hundreds of other resources that enable you to become a high-performing leader.

If you want to become a member, then click here

Pay What You Want

Minimum is set at $1 - so if that is all you can afford, then that is all you need to pay. But, if you feel these documents will make your life easier, then please feel free to pay an amount that you feel it is worth to you and acknowledges the work I have put in to create them for you.