Do you know why sometimes even the people you like frustrate the heck out of you? It all comes down to different communication styles and personality quirks.

If you have ever:

it is possible that you used the wrong communication style when interacting with them. In this article, you are going to get some tips on how to make sure that the 'right' version of you turns up when needed!

Most people have distinctive personality traits - which is their way of dealing with the world (both inwardly and outwardly).

For example, some people are laid back with a happy-go-lucky/devil-may-care attitude toward life. Others much prefer to have their life more structured, precise, tight, controlled and would as much do something on a whim, as they'd fly to the moon!

The reality is that we need to deal with differing personality types (just as others need to deal with our personality shortcomings!). Understanding what causes people to behave the way they do, and having strategies to better influence these people will help make your life easier and more successful.

Transactional Analysis (TA), developed by Dr Eric Berne in the late 1950s, is a useful tool that helps you to understand what makes you and others tick and helps you to enrich your interactions with all types of people.

According to TA, when we interact with others, we do so from one of three communication styles (what Berne called "States"). We can 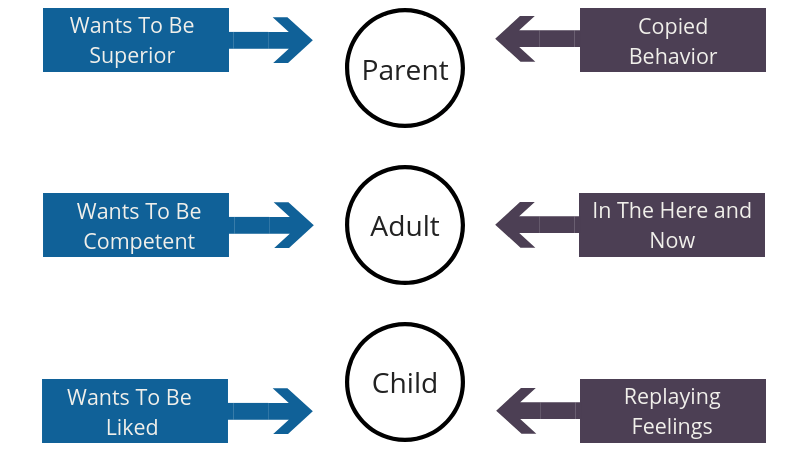 We don't actually have separate compartments like this within us, and in the space of a single conversation, you could easily flick between each of the three styles! However, a model such as this makes it easier for us to understand personality traits and gives us a common language ... which helps you improve your interactions with others so you'll have less conflict in the workplace.

At one time or another, we all display the characteristics associated with either the Parent, Adult or Child. However, most people have a 'home zone' that they are more inclined to go to, in times of stress or pressure.

Depending upon your upbringing and your personality you are likely to use one of the styles more frequently than the other two. For example, a person may use the Parent far more regularly than the Adult or Child.

You'll minimize conflict and improve relationships when you can identify whether another person is currently thinking like a Parent, Adult, or Child, and then respond from a wavelength that complements theirs.

When you get to know the types of words, tone of voice, body language and facial expressions each state uses ... then you'll be able to recognize the part of another person's personality you are dealing with, and can make choices about how to respond effectively to them, so you get the results you want.

So let's take a brief look at each of the three communication styles so you have a better understanding of them.

The Parent - How It Can Stop Communication In The Workplace Dead!

The Parent contains the values, beliefs, attitudes, traditions, prejudices, opinions and behaviors you recorded as a child. These are handed down generation to generation, with (unfortunately in many instances) little to no editing. In other words sometimes your responses to situations are because of early childhood programming, and aren't healthy for what's going on today.

There are two aspects of Parent that you would have recorded: Critical Parent and Nurturing Parent.

The Critical Parent is controlling and restrictive and uses words like: 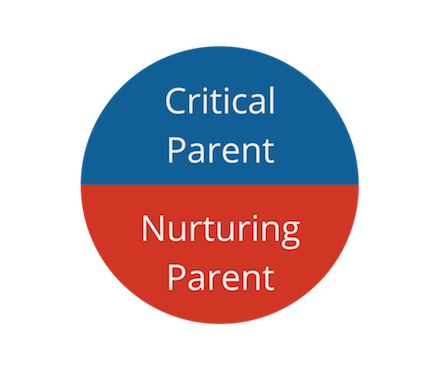 You will find plenty of Critical Parent types in command and control type organizations. The Critical Parent (sometimes known as the Controlling Parent) can have a very negative impact on communication and performance.

A person with a strong Critical Parent, will generally be very rule bound, wants things done his/her way - regardless of the needs of the situation, and often stifles creativity, and 'thinking out of the square' behavior. They tend to be critical, and bossy, in their style, and consequently often not very well liked or respected.

A person who frequently uses the Critical Parent style can be challenging to work with, particularly when he or she finds themselves in a leadership role. They try to 'shape' everyone up to perform and behave in the way they want. Their thinking is something along the lines of: 'this is how things should be done around here.'

When someone is using their Critical Parent style (and we all have it, just some of us use it too often and often in all the wrong places and times), you can expect communication to be abrupt, stinted and one-way.

Often the person on the receiving end of a Critical Parent will clam up and either become subversive (doing things behind the Critical Parent's back), or switched off (no longer willing or able to contribute).

If you would like a fuller description of the Critical Parent, how better to identify a person using Critical Parent and its impact on relationships, along with several exercises and activities that help you become a better influencer, then access "Understanding and Influencing Difficult People"

If you feel that you have been using Critical Parent too much, 'telling' people what to do, there is one simple thing you can do. Maybe you could make more use of either, the word 'maybe' or 'could'. This is a much gentler way of influencing others.

You don't like being told what to do, do you? Guess what - neither do the people who report to you!

Do you have people in your workplace who like to take care of others? For example, when they see someone stressed and overwhelmed offers to make them a cup of coffee, or take some of their workload off them. Or, they go out of their way to show the 'new person around? If so, these are people who have a strong Nurturing Parent State.

The upside of the Nurturing Parent is that they help others to feel good and can create a harmonious work environment. The downside for a leader, who is strongly attuned to the Nurturing Parent, is that he or she can run the risk of being cloying, and may inadvertently stifle the growth of their people by continually doing things for them, taking up the slack and hovering.

The Nurturing Parent is helpful and caring and uses words like:

One of the challenges when dealing with a person who is firmly in their Nurturing Parent, is that he or she is mostly focused on pleasing others - and avoiding conflict at all costs. Therefore, if they have some 'bad' news, they may not deliver it. Or, deliver it in such a way that the other person doesn't really 'get' it. Or, if they disagree with another person's ideas they may not speak up .... even though that idea may lead to negative consequences.

If you have a strong Nurturing Parent you need to be aware that even though everyone will think you are nice and caring, you can end up with more than your fair share of work, and you may also end up with a group of people reporting to you, who aren't stepping up and shining to their full potential ... because you haven't 'trusted' them to be able to do more. Read more about this trap in "Understanding and Influencing Difficult People"

Go to Part Two of this article Read about the Adult and the Child and their impact on workplace relationships.

Part 2 of this Article