Have you read Part One of this two part article series? Read Part one to be able to make sense of this article:

To Improve Communication In The Workplace We Need More Adult - (But Not Too Much!)

The Adult is the part of you that figures things out logically, looks at facts and figures and then reasons out an appropriate answer. In your Adult you remain rational and non-emotional - no matter the circumstances or aggravation going on around you.

Think of it as the Dr. Spock of your personality.

The more you use your Adult, the better most interactions with others will go, (particularly if there is some 'heat' in the conversation).

A word of caution ... If someone uses the Adult all the time, they are a fairly dull person to be around. Most people will find him or her clinical, remote and hard to warm up to.

The Adult is analytical, fact-based, rational and calm and would say things like:

The Adult is the most useful of the communication styles when tempers are up, and people are speaking at cross-purposes.

The Child and its Impact on Workplace Relationships

The Child is the 'felt' part of you and is the storehouse of your creativity, curiosity and the desire to explore and understand. When a person is in the grip of feelings, (for example, their anger dominates their reason) we say their Child has taken over.

Imagine someone comes to you and says, 'Hurry, the boss wants to see you.' Most people's immediate reaction is for their stomach to lurch and thoughts to the effect of 'What have I done wrong?' This response is their Child ... transporting them straight back to school days when called into the Principal's office ... feelings of anxiety and nervousness at some (yet unknown) wrongdoing.

Like the Parent, there are two aspects of the child: Natural and Adapted. However, the Adapted Child is split into two further types: Rebellious and Compliant.

Have you ever had one of those days where you just felt on top of the world? A Disney-type day, where everything you did and encountered just felt wonderful. Nothing could shake you from the sense that everything is okay with the world. That was your Natural Child coming out to play. 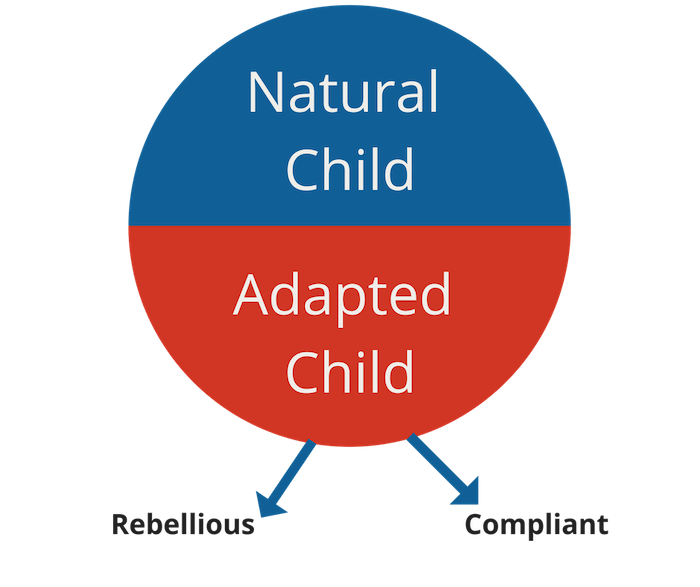 You will hear someone in their Natural Child saying things like:

Great leaders are excellent at balancing the playfulness and delight a Natural Child brings, with the need to get on and get things done. If you can master that balancing act for yourself and your people, you'll be a strong influencer.

The Compliant Child wants to do the right thing. To be polite, sociable and considerate of others. S/he knows right from wrong, and conforms to what is expected. The problem faced by a person who is actively tuned in to the Compliant Child is that they lose sight of their own needs. Always looking to how others want them to be, they can lack initiative and feel quite vulnerable in the world.

In the workplace, these people viewed as 'Yes Men.' Lacking initiative. They are known for following the meaning of the law rather than the spirit.

Having many unexpressed needs, the person with a strong Compliant Child, may internalize a lot of resentment. Then, one day it will overflow, and there will be an explosion ... leaving everyone around that person wondering what on earth happened!

At work you will hear the Compliant Child saying things like:

The Rebellious Child is the part of you that resents the demands of others and complies with them grudgingly. This is the sulky argumentative, authority-questioning part of you.

Because they can show more initiative than the Compliant Child, if handled well, the Rebellious Child can be a good leader.

At work you will hear the Rebellious Child say:

By completing the exercises in the "Understanding and Influencing Difficult People" training you will get a better handle on your predominant communication style. You'll also get tools to help you deliberately choose how you will respond to someone who is causing you problems.  Even better, you will have the tools to get them to shift to a more useful state when interacting with you.

Do you want to improve how you get along with others?

Over the next couple of weeks take the time to analyze conversations you are having with various people. Ask yourself:

WHO IS DOING THE TALKING?

Then decide if you should choose to use a different communication style to respond to that person in order to get a better reaction.

If you learn how to identify States mid-stream (hint the ebook Understanding and Influencing Difficult People will get you a long way toward having this expertise - ~wink! ... you will grow your confidence and ability to make the choice to change your communication style mid-conversation so that YOU can lead the conversation to a much healthier and more rewarding conclusion.

Part 1 of this Article