Challenging Assumptions Is Critical To Your Success

During a recent coaching call, a client mentioned a troubling conversation she had had with her CEO a year or so ago.

She was still a little rattled about the conversation, and it was having an impact on how she viewed her career.

As her story unfolded, I could see that she had blown it into bigger proportions than it likely was.

So, I talked her through the FAIR tool. Within 5 minutes she had a different view of the situation.

What had been eating away at her for over 12 months ... suddenly it had a new meaning. She has a renewed sense of purpose, determination and confidence. In this article, I'll take you through the steps, so that you too can reframe something that has been bothering you for a while.

Most of us have a gremlin that gnaws away in our head.

Picking at and worrying over an interaction that we wish we could do over.

That is wasted energy and you need to stop it!

During any interaction, we make a whole bunch of assumptions about what that person did or didn't mean or intend. Unfortunately, we let the gremlins in our head go wild, based on those assumptions. 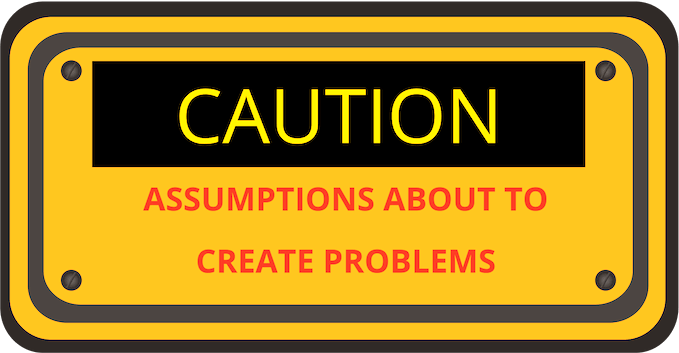 Assumptions can cause you to:

Have You Ever Had Something Like This Happen to You?

Maybe you recognize this type of scenario:

You're sitting in your office, and Jo (one of your peers) pops in and says:

"Hey, I've just left Sue's office (Sue's your boss). She wants to see you about your team."

Jo: "Not sure, she was a bit short with me, so it didn't feel like I could ask. She did say something good for my team though. Our team is going to be the first to get new iPads. She said your team will have to wait. She also mentioned that a couple of people in Jen's team have been performing well. She's looking at rewarding them with bigger opportunities. Anyhow, gotta fly, I'm off to buy donuts for my team, to celebrate Al's birthday."

As Jo disappears down the hallway you gulp and move into panic mode!

"Oh heck, my team's not been performing at their best recently. She's probably going to reward those performers from Jen's team by giving them promotions, and then breaking our team up. What if Sue demotes me to make way for the promotions? Surely she wouldn't do that. We've only talked a couple of times about my team and their need to start hitting more goals. Maybe she thinks by demoting me she'll send a message to all the other team members.

If she was short with Jo she'll likely be cranky with me. This can't be good.

We are being punished for our performance. That's why we aren't getting those iPads. It's sure to get my team hot under the collar if they don't get their iPads fairly quickly after Jo's team."

By the time you get to Sue's office, you've got a good story going on in your head. You think you know why Sue's summoning you to her office. You're convinced it's all about your team's performance and the upcoming promotions of team members in Jo's team and your team's disbandment! Your legs are trembling. You're feeling defensive.

Unfortunately, you are likely to walk in with a vibe that is confrontational or defeatist (depending on whether you're a flight or fight kind of person).

What if you did this instead. Take 30 seconds, grab a piece of paper and think back on your conversation with Sue and use the FAIR Grid. The FAIR grid is a quick and easy way to sift out fact from assumption. Information that is relevant or irrelevant. 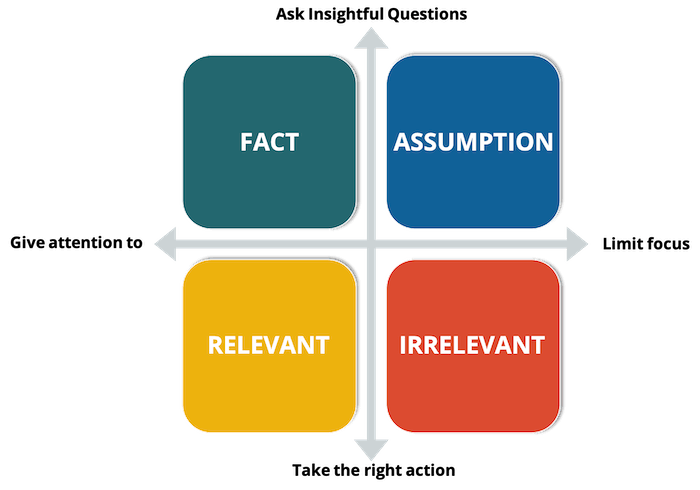 Let's use the FAIR grid on the above scenario. 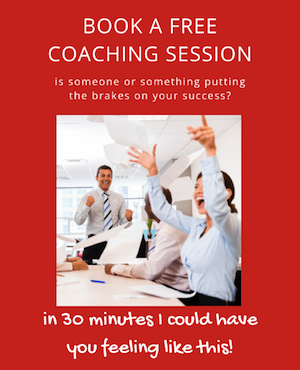 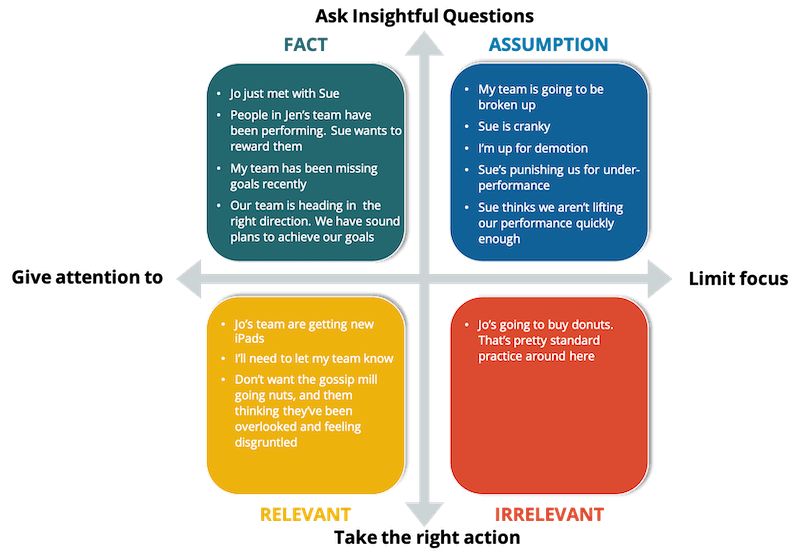 How much more rational will you be when you hit Sue's office, if you take a few moments and think critically?

Whenever you find yourself starting to feel panic, hurt, anger, surprise, defensiveness, you need to take a moment.

I like to call it the moment of choice. 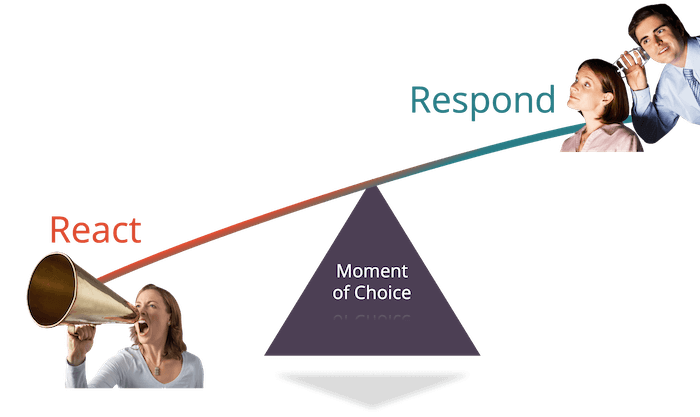 Because whenever feelings are triggered, you can pretty much guarantee that, unless you slow it down for a second and think rationally, your feelings will likely send you down a path you don't need to go.

More critically, even once the initial feeling has subsided unless you sift through fact and assumption you are likely to believe the story in your head about what the other person meant or what their intent was. (And, like my client this could be a story that has traction for a long, long time - and could be having a negative impact on your relationships). More often than not, your story is mostly wrong or based on flawed assumptions!

When you assume that you know what the other person meant or intended you close yourself off to discovery, to opportunities to strengthen your relationship, to get different, better results.

Because we are basically lazy, (and getting more so in this microwave society in which we find ourselves), we tend not to probe and ask questions.

Geneticists have a maxim: "We always get what we screen for". And the same holds true for you. If the filter through which you screen the interactions in your life is along the lines of, 'what negative impact could this have for me' then your stories will reflect that.

Think back on a recent (or even not so recent) interaction that you've had with someone. An interaction that you walked away from feeling less than inspired. Use the FAIR grid to go back over the conversation and sift out fact from assumption. Relevant from irrelevant. Once you've done that, give some thought to what might be the appropriate action you should take. Do you need to have a clarifying conversation with that person? Do you need just to let it go and move on?

Your Happiness Depends on This!

Sonja Lyubomirsky, University of California, suggests that 50% of your happiness is genetic, 10% depends on your circumstances (job, home, mate etc) and 40% is under your power to control.

If you are unhappy and stressed about a myriad of things in your life, you might want to use the FAIR (Fact, Assumption, Irrelevant, Relevant) tool on a regular basis. It is one of many tools you can use to control your happiness levels and improve your ability to live, love and lead remarkably!

Non-Members Donate What You Want to Access these documents.

Minimum is set at $1 - so if that is all you can afford, then that is all you need to pay. But, if you feel these documents will make your life easier, then please feel free to pay an amount that you feel it is worth to you and acknowledges the work I have put in to create them for you.

Have Your Say/Ask a Question