Assertiveness in the Workplace

A lack of assertiveness in the workplace is a major contributor to poor performance, even though it is one of the skills that is regularly and readily taught in most negotiation training courses.

Unfortunately, assertiveness in the workplace has a bit of a bad rap. People are often made to feel guilty for speaking up for what they want and need. As it happens, from childhood the messages we are given, either directly or subconsciously, is to toe the line. Don't rock the boat. Which works great if you are leading a team and you DON'T want innovation and creativity!

Assertion often gets confused with and labeled as aggression. Don't make this mistake! Aggressiveness is attacking and destructive, and the needs of the person being attacked are lost in the interaction.

Contrasted with this is passivity, which you don't want either.

Assertiveness means that the individual respects, and cares for his/her own needs, along with the needs of the other party

A lack of assertiveness in the workplace leads to many elephants wandering through your corridors. Huge, big elephants that people are pretending don't exist, yet everyone knows they are there.

Elephants are things that should have been said but weren't. Or things that were said that shouldn't have. With no one daring to call another person on his or her poor behavior. Especially if that person is more senior to them!

These elephants are resentment, frustration, anger, confusion, and so on. 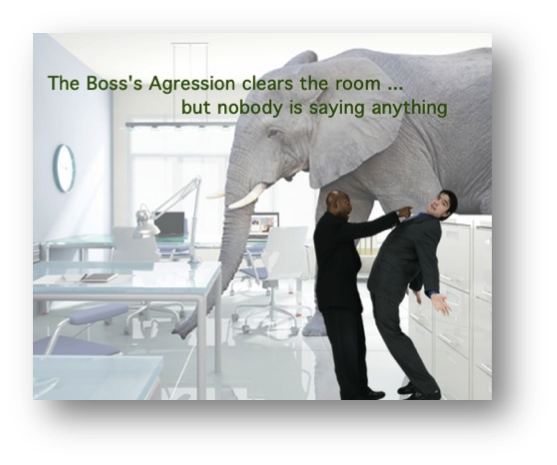 Generally, nobody's talking about the elephants openly, but they are showing up in poor behaviors. For example, work not being done on time or in a sloppy manner, gossip, absenteeism, etc.

Do you work with an aggressive person and aren't sure how to handle him or her?

Access "Successful Feedback." Within you'll find tips and tactics to help with the toughest of individuals ... because you deserve to have the skills and mindset that create great relationships.

Developing assertiveness in the workplace is ultimately freeing. It can stop you from being walked all over, or walking all over, others! It enables you to have conversations in truth. It allows people to address issues head-on - respecting their own needs and the needs of others.

Fear of Rejection Causes Lack of Assertiveness in the Workplace

Quick question: Has someone done something recently that has ticked you off a little, yet you've said nothing to him or her? When I work with leaders in workshops, I often ask this question: "Did you NOT give someone feedback in the last week, because you were concerned about how they may react?" In my very "scientific" study, I've discovered that more than 90% of people have not given appropriate feedback.

Over, and over again, the groups discover that the primary reason people don't give feedback is that they fear the reaction of the other person, and what that person might think and say about them. In other words, they fear rejection.

As a leader, it is critical you understand that every single person in every single organization comes to work with his or her own agenda. Their agenda is to be loved and approved of. Sadly, most people don't realize that this yearning is what drives much of their behavior. It is this need for acceptance, that causes people to be unassertive and not to confront unwanted actions (or inactions).

When you remove your own agenda, and care enough about yourself, and others, to have truthful, direct conversations, you will create an energized and high performing workplace.

Discover the skills you need to hold direct, truthful conversations

Get this right and you'll consistently lead with respect and pride.  Access  "Successful Feedback."

If you aren't ready to access the training, adopting these simple steps below will certainly set you along the path to having more assertiveness in the workplace (but to become a master influencer I highly recommend you access "Successful Feedback")

1. Start With Caring More For Others Than Yourself

You'll be a more powerful leader when you care more about others success, than your fear of their reaction to your feedback. Whether it is a peer, a direct report, or your boss, share feedback that may be stopping them from being successful. For example, you could say to the person: "I want to support you hitting your goals and ambitions. There's a matter I'd like to share with you, that could have an impact on your on-going success. Do you have a few minutes?"

Straight up you are showing the person that, it's because you care that you are sharing this with them. You are respecting them, by asking if now is a good time.

You must be sincere when you say you are doing this 'because you care and you want to support them to their success'. If your agenda is all about you; (making sure this person 'gets it right' because you are scared their mistakes will reflect poorly on you, and you might be adversely impacted) well ... the other person will see straight through it, and the conversation will not go well.

And, oh boy do I know that from personal experience.

My not caring cost me dearly

Early in my career, I was a leader who was more concerned about my success, than that of the people I was leading. I was pretending as hard as I could, that I cared about them. When in fact, what bothered me was that every time they messed up it reflected poorly on me, their leader. Naturally, as might be expected, they saw straight through me. My results - as you can imagine - were generally less than spectacular!

Or, put another way, they were spectacularly poor.

When I began to care for others success, as much as my own, it was transformational - both for them and me. It certainly took a lot of personal growth and willingness to stare down my fears and limitations. Thank goodness I had remarkable leaders in front of me who guided me through the messy business of stepping into my potential.

No accusations, no judgments! "You're rude" ... that's simply aggressive behavior. Instead, state the exact behavior you witnessed. "In the meeting earlier today, when Mary was talking, you cut across her, before she had finished, and didn't acknowledge her point of view."

3. Be Open to Dialogue

Once you've shared the facts, then it is essential you ask a question to get them talking, so you understand their point of view. You might say something like, "Can you help me to understand your thinking behind this?" Be very careful with your tone of voice and the words you use. It can be easy to come across as judgmental.

Once you've worked through the issue, you should agree on the actions either/both of you need to take in the future. Even if it is as simple as getting together in a day or two - just to discuss any thoughts/emotions that have come up from this conversation.

Follow these simple steps, and you will have more assertiveness in the workplace. Assertiveness that leads to respect, dignity, people's needs being met, and ultimately higher performance.

One situation many people need more assertiveness is in managing their boss. Broaden your capability to be assertive with your boss.